Disney's California Adventure Park: Memories of the Past

Way back in 2003 when my mom and I first took my kids to Disney's California Adventure Park (DCA) which had not been open for long. We had never been there either. We all fell in love with the park. We loved the Southern Beach feel that it had. It was not Disneyland but had a Disney feel complete with Disney magic. We spent a lot of time hopping from one park to the next.

The first thing to go that we loved was Golden Dreams. It was a wonderful and interesting story told by Woopie Goldberg about California and the dreams that made it what it is today. I wish they would put the story on DVD becaue it was such a great story. Sadly I didn't get any pictures of Golden Dreams before it was removed but I did get some shots of this building that was just around the corner. We spent a lot of time there because restrooms were a part of this structure.  My sons also loved getting their pictures taken here. 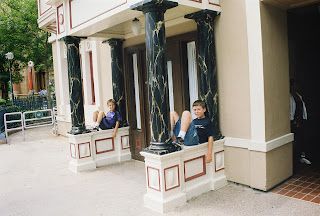 When we arrived in 2009 to find Golden Years gone and Ariel's attraction in the making we also found that the water at the pier had been drained so they could put in World of Color. 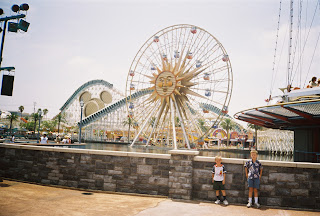 This picture was taken back in July 2003 on our first visit to DCA. Such a different view from what was to come. 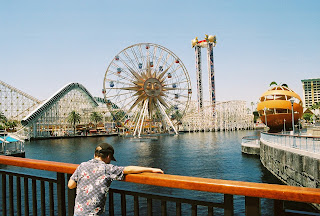 Then later in 2009 things looked much different in this area. The water was gone and the sun wheel had changed. We looked forward to the World of Color but things sure did look dreary without the water. 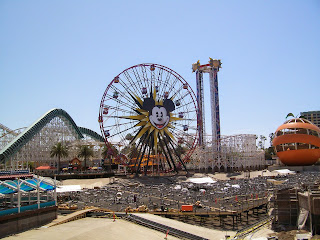 A few years later in 2010 things had changed quite a bit. The Orange Stinger was gone and in its place was Silly Symphony Swings. I must admit we have not tried them. We felt secure inside the stinger but have not felt as secure being out in the open. Someday I will give it a twirl though. 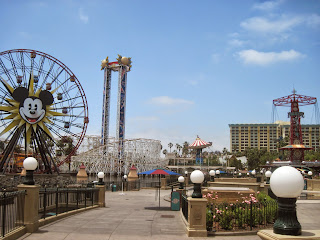 This is the Maliboomer in its glory. One of my sons favorite rides after they got the nerve to ride it. Sadly they were only able to enjoy it for a couple of years before it was removed. 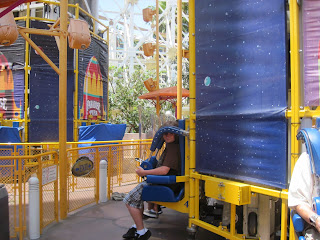 The following year another area we loved was gone. Bountiful Valley Farms left for Cars Land. Now don't get me wrong, we love Cars Land but we were sad to see this neat area leave. 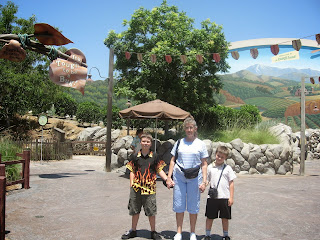 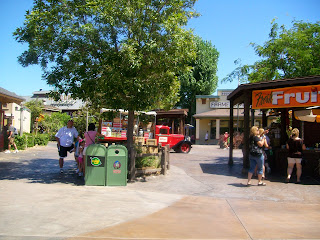 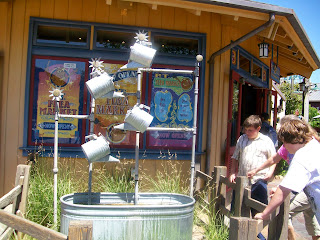 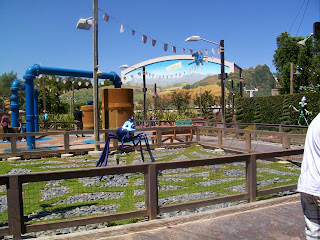 One of the saddest things for us was to say goodbye to our beloved Electrical Parade. I remember watching it as a child as it went down Main Street USA. Then we were lucky to see it again at DCA. The music always makes us dance and we were brokenhearted to learn it would be leaving in 2010. I hope everyone enjoys these shots I took in 2009 as we said farewell to a Disney tradition. I will post YouTube video once I get that loaded. 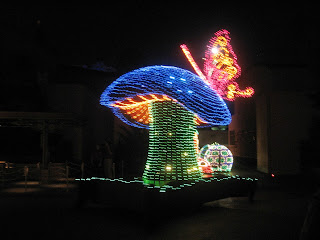 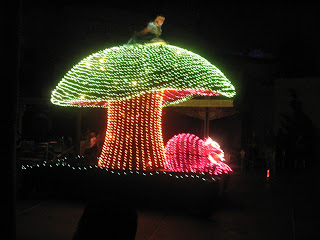 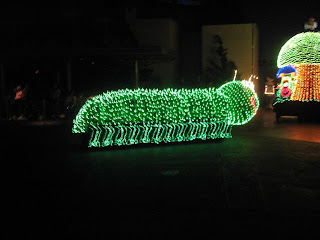 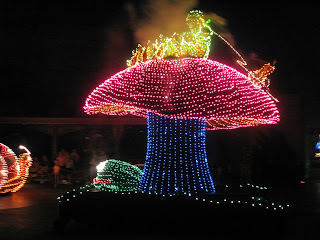 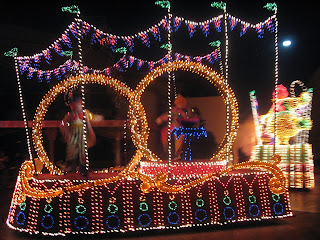 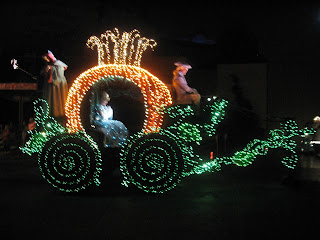 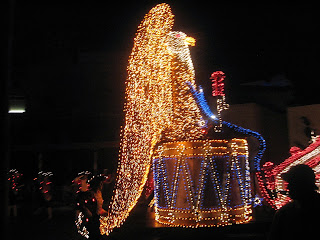 That ends my memory lane tribute for now. I will continue soon with a tribute to the DCA entrance and the San Francisco Bridge replica and the letters. We also will dearly miss Condor Flats. Soon we will see the new area and I am sure we will love it but that does not mean we do not miss what was.

Disneyland Resort is a magical place to visit. It is a place where people can go to let their inner child out. Everyone has the chance to make special memories. The park offers something special for all who visit. So that everyone can have a magical visit there are rules that should be followed. These rules are in place so that each guest can visit and create special memories. There are some behaviors that are just out and out rude. People should really try to use some common sense and consideration. Those guests who do not abide by the rules can take some of the magic out of other guest's experience.

The saying "no flash photography" is heard on many of the rides as guests first take off on their journey. Disney has a reason for this rule they are not being mean or wanting to take the fun out of the experience. This rule is in place so that each guest has the chance to have a magical experience. Many of the rides are set in low lighting. This makes the flash extremely noticeable. It is very annoying to be on Disneyland's Pirates of the Caribbean while people are taking flash pictures. It takes the magic out of the experience when lights are constantly flashing. The light from the flash can also be extremely blinding when it hits you right in the eyes. Haunted Mansion is another ride that takes place in the dark. When people constantly take flash pictures it is very distracting. Haunted Mansions cast members will actually stop the ride if guests are taking too many pictures to tell them to stop. This takes a bit away from the magic too. Disney California Adventures Soaring Over California is not a dimly lit ride however the flash can be seen by other guests as it goes off. It takes away from the magical experiences if you see flashes going off while soaring.

Some rides allow flash photography such as Disneyland's It's a Small World. Guests need to remember not to take pictures when the flash will go off in someone's eyes. It is very annoying to be on the ride and have someone turn around to take a picture and the flash goes off. People need to stop and consider other guests and only take shots in front of them. People simply need to be thoughtful when taking pictures.

Littering is something that should not be done no matter where you are. The cleaning crew at Disney Resort does an excellent job keeping the parks clean. It is a constant job too because so many people litter. Disney places receptacles all over the park, there is absolutely no excuse in people littering. Many times there are water bottles or wrappers in the plants or even in the scenery area of some rides. If cast members stopped the rides for cleaning every time people litter, the rides would never be open. People really need to be considerate and respectful of the next guest who wants to see the ride, of those who clean the ride and just of the whole area. It does not take that much effort to walk over to a trash can and throw your trash in it. The cast members keep the cans emptied so there's always room for more. Litter bugs should find another place to play if they can't keep things clean.

Cutting in line is another extremely rude behavior. Everyone wants to get on a ride, those who cut do not deserve to get to get on the ride any quicker than those who wait in line. Saving places for a huge group of people is also extremely rude. It is not fair for a family to send one member to save a place on a ride while everyone else goes to do other things. If every person did this it would change the wait time and so when you get in line and the time says 35 minutes, all of the members of the groups show up so the wait ends up being 50 minutes instead of 35. If people want to ride, then the whole party should be present. If the whole group can't be there at the same time then they should either ride separately or the people who arrive first can wait for the rest of the group before getting in line. It is only common courtesy. Those who are willing to wait in line want to ride just as much as those who think they deserve to jump ahead. Granted there are times the kids need to use the restroom and get out of line, which is different. But even then, in all fairness to the rest of the people, those who get out of line should wait and ride later on. The waits can be long, take care of business before getting in line. 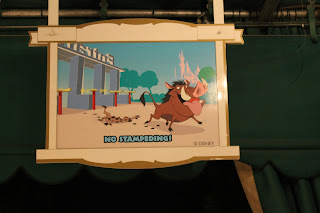 Shoving in front of people is also rude. If you are waiting for an attraction such as World of Color, let those who got there first, go first. Don't shove them out of the way until you are in front. They got there ahead of you and were willing to wait. You didn't want to wait so you don't deserve to be in the front of the line.

Disney Resort is a family place. Many people take their young kids to the parks. Foul language and making out should not be allowed. Those who wish to use foul language should stay home, don't go out in public and talk that way. Many parents don't want their kids to hear foul language. Making out also should not be done in a family environment. Hold hands, peck on the cheek, quick kiss on the lips, those are all fine but to grope and make out in public is rude. That is what motels are for, if people want to do that they need to get a room or stay home. Animals behave that way because they do not have the intelligence to know that it is not proper, people should know better. Other people, especially young children, do not and should not have to hear foul mouthed people or watch couples make out.

Standing in the middle of the walkway to visit is also extremely rude. The parks are crowded and a lot of people are trying to get from one attraction to the next. If you want to visit, or plan out the day, move to the side of the walkway so that other people can get around you. It doesn't take much to do that and sure can make the traffic flow smoother.

Those in wheel chairs can also be rude. Being in a wheel chair does not give people the right to push in front of others. Those wheels hurt when they run over toes. Strollers are the same way, parents need to pay attention and stop cutting people off or running over their toes with strollers. People need to pay attention to the world around them and stop thinking of only one person….themselves.

One of the rudest and most annoying behaviors at the parks is those people who put their children on their shoulders to watch the shows such as Fantasmic or World of Color. Nothing is more irritating than to be watching a show only to have some inconsiderate person place his or her child on his shoulders. Maybe they are so ignorant that they think their child makes a good window. Well, the child is not invisible and does not make a good window. This takes the ability to view the show completely away from the person behind the child. If people are worried about their kids seeing the show, get there earlier to be in front or just hold the child in your arms. Don't ruin the experience for those behind you. Certainly all people in the world are more intelligent than to think those behind them can see through their child.

Posted by Kim Miller at 3:33 PM No comments: